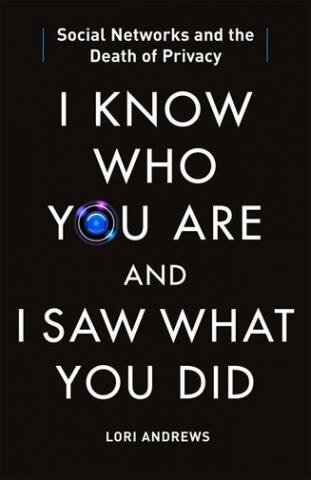 Lori Andrews' book "I Know Who You Are and I Saw What You Did: Social Networks and the Death of Privacy" (2012) fits nicely on the bookshelf between Daniel Solove’s "The Future of Reputation" and Viktor Mayer-Schonberger’s "Delete."

While the title and the proposed constitution focus on social networking sites, Andrews discusses the dangers that can arise from intentionally sharing information online as well as the minute data collection that occurs behind the scenes, which exist in most areas of the Internet.

Andrews argues that transferring values, legal interests, and rights into the Internet Age has not gone smoothly. She claims social networks are necessary places for individuals to express themselves and grow, but do not provide the protection necessary to maintain values of autonomy, freedom from discrimination and prejudice, freedom from government surveillance, and connectivity. Andrews argues that all social networking sites should have to respect 10 basic rights:

In developing these 10 basic rights, the author relies on certain assumptions about social networks that seem questionable. Andrews contends, for example, that "[p]eople came to Facebook Nation for freedom of association, free expression, and the chance to present an evolving self.” (p.13) I do not know anyone that has joined Facebook for those particular reasons (people usually claim “keeping up with friends from high school”). There are sites where individuals go to say whatever they want (e.g., 4chan) and meet individuals with similar interests (e.g., interest specific forums), and even presenting an evolving self can be done, although very difficult (this may be because the evolving self is not agreed upon as a positive aspect of society, as the right to be forgotten debate illustrates).

Another dubious claim is that “Social networks have become ubiquitous, necessary, and addictive.” (p.3) However, many people do not have Facebook profiles and get along just fine (I can personally attest to this) and  according to a recent PEW study, a majority of Facebook users have taken extended breaks from the social network site or have left it altogether.

Whether or not social networking sites are necessary to modern life and whether they all must protect a standard set of social network-specific rights aside, what I enjoyed about this book is the intolerance Andrews has for these audacious and manipulative data collection and use practices. Social networking sites, third party partners, and governments take advantage of users, are deceptive about it, and are not accountable for the harms that result. Like a number of privacy books, the examples are quite frightening (Goodreads review: “OMG. If this book were transferred into fiction, it would be classified in the horror genre.”), but unlike the others, Andrews does not want to spend much time talking about and balancing the benefits of big data or information sharing, which is very refreshing.

The quibble I have with Andrews’ book relates to the neglect of the European Union Data Protection Directive. She mentions it briefly three times in the book, but it is unclear to me why she would not promote the Directive as the global Social Network Constitution with some minor changes (her SNS Constitution holds a very American prioritization of speech). Having been in place since 1995 (work to update the 1995 version was announced in 2010 and a draft regulation was released in 2012), the EU Directive seeks to establish foundational information rights, many of which are included in the 10 rights listed by Andrews. The problems that ensue from a horizontal approach to privacy that grants vague rights and is difficult to enforce across a number of countries are those I would like to have gotten Andrews’ take on, as well as why her proposal would not suffer from the same shortcomings.

Is Big Data Corrupting the U.S. Election Process?
Is Your Use of Cloud Services Heating up the Earth?
Self-Driving Car Ethics
From the Newsroom to the Television screen: the blurred line between news and entertainment
END_OF_DOCUMENT_TOKEN_TO_BE_REPLACED