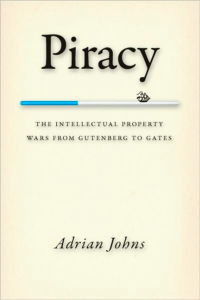 The contemporary discourse surrounding the issues of copyright law, file-sharing, and intellectual property might lead you to believe that piracy is a relatively recent endeavor, one which was ushered in by the digital age, the Internet and Web, the proliferation of digital devices, and the ease with which digital files can be copied, distributed, and shared among users. However, Adrian Johns’ book Piracy (published by The University of Chicago Press) reveals that piracy, as currently defined, has a long, colorful, history beginning in the mid-1600s. In ancient times craftsmen formed guilds to uphold the standards, customs, and duties of the craft. Similar to a contemporary professional licensing board, each guild governed its members and its craft by issuing rules regarding proper conduct, professional courtesy, and the requisite knowledge and skills of each craft. The guild protected its craft and its members’ interests in the preservation of standards.

Piracy is a book of the very human stories about the intersection of creative endeavor, ownership, commerce, and questions concerning who is able to legally profit from original works. Original works in the book run the gamut from print materials, music, audio and video recordings to pharmaceuticals among other commercial products. In his meticulously researched book, Johns produces a scholarly, comprehensive examination of the history of piracy and the protection of ownership from the Middle Ages to the present. In each era, piracy must be defined as such by contemporaries of the time to be classified as piracy in the book. According to Johns, the definition of piracy has been transformed at various points in time. Over the millennia, struggles over ownership and piracy have consistently resulted in the redefinition of each concept giving birth to new laws. One contemporary example is the TEACH Act which redefined the terms and conditions on which accredited, nonprofit educational institutions throughout the U.S. may use copyright-protected materials in distance education. The newly defined terms include the acceptable use of copyright-protected materials posted on course websites and by other digital means without permission from the copyright owner and without payment of royalties.

This change in law is one reflection of the penetration of digital devices into our society and school curriculum. Many contemporary students are digital natives for whom a life fully integrated with digital devices is the norm. According to a recent article in The New York Times, parents of toddlers use iPhones to entertain (and quiet) their children. The toddlers are so enthralled with the devices they are reluctant to surrender them back to their parents, thus they are becoming accustomed to manipulating and using digital devices at a very young age. Students’ digital fluency and the ease with which they are able to create, copy, manipulate, and post content to the Web with these devices so quickly enables them to act hastily – often without a thought for the potential ramifications – and highlights the societal need to develop conventions for proper, ethical conduct surrounding the use of these devices.

These abilities also raise questions such as, who are the guardians of proper conduct and who upholds ethical values in the 21st century? Who decides the norms? Whose duty is it to educate citizens concerning the values of civil liberties, free speech, privacy, and autonomy? Now that technology is such an integral part of everyday life and education, and duplication of digital files can be accomplished so easily and quickly, who educates students concerning copyright laws, ownership, intellectual property, fair use, and public domain? Who helps them understand both their rights and their responsibilities concerning copyright and technology?

As Johns states in his book, struggles over ownership and piracy have resulted in new concepts and ultimately, new laws. In his concluding chapter, he calls for a conversation concerning the redefinition of current intellectual property laws. We can look to history as a guide to help answer these questions. Ultimately, as professionals, it is up to us to open the conversation and to educate students on these issues.

Ballard is an instructional designer in the Web Course Design Group at the University of Minnesota. Her research interests include usability issues, intellectual property, and enhancing pedagogy in the online environment using emerging technologies.

Is Big Data Corrupting the U.S. Election Process?
Is Your Use of Cloud Services Heating up the Earth?
Self-Driving Car Ethics
From the Newsroom to the Television screen: the blurred line between news and entertainment
END_OF_DOCUMENT_TOKEN_TO_BE_REPLACED