We Are Anonymous by Parmy Olson 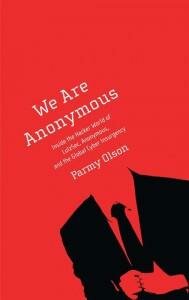 Parmy Olson’s fascinating book "We Are Anonymous" will prompt readers to concoct impossible-to-remember passwords and to disguise their online identities as it takes them on an excursion through the muddy cyber land of hackers.  In their attempts to take on governments and ridicule the gullible, they take few prisoners.  Members of the loosely organized collective Anonymous have been “credited” with a plethora of cyber attacks, including one on Paypal that cost the company millions of dollars.

The book starts out by recounting the early days of the mysterious hacker group.  Olson traces the origins of the group back to early discussion boards and chat rooms, where people talked about Japanese anime, posted photography, or ranted about other random topics.

She distinguishes two sides of Anonymous: a side motivated by a prankster mindset and a side driven by activism. An example of the former is when Anonymous members manipulated Facebook users into sharing their passwords or threatened them with hacks until they agreed to share pornographic images of themselves. The activist side of Anonymous is on display in the larger and more organized attacks against specific governments and countries.

The true heart of the book is the introduction of specific individuals who were deeply involved in Anonymous.  Olson gives a gripping account of conversations that occurred among Anonymous members as they were perpetrating their attacks.  She describes the tension that erupted between various groups of hackers, their methods for attacking fellow hackers, and their attempts to reveal each other’s identities.

The book shines a spotlight on a core group of Anonymous members who broke away from the organization and developed their own hacking group, LulzSec.  The author familiarizes readers with online personalities such as Kayla, Sabu, and Topiary as they launched attacks on PBS, Sony, or the CIA and developed ties with Wikileaks.

As the book progresses, the author reveals the real identities of the LulzSec members who were arrested as well as those of other Anonymous members. Olson pays particular attention to the actions of the lone Anonymous member who acted as an informer to the FBI for eight months.

While the author defines hacking or cyber terms as they are introduced, the use of the lingo can make the book confusing to read. (It is easy to forget some terms if you put the book down for a few days.) Thankfully, Olson has included a useful glossary that can jog the reader’s memory as needed.  Another welcome feature of the book is a timeline that provides the reader with a brief history of hacktivism between 1994 and 2012.

"We Are Anonymous" provides a compelling and often creepy look into the world of Anonymous.  It likely will leave readers paranoid about their own online identities.  The book is well-suited for academics who are interested in hacking as well as individuals who are looking for a captivating story.

Is Big Data Corrupting the U.S. Election Process?
Is Your Use of Cloud Services Heating up the Earth?
Self-Driving Car Ethics
From the Newsroom to the Television screen: the blurred line between news and entertainment
END_OF_DOCUMENT_TOKEN_TO_BE_REPLACED